This article is a draft, many details are still missing.

The United States of North America, shortened to USNA, is the second biggest country of the American continent. 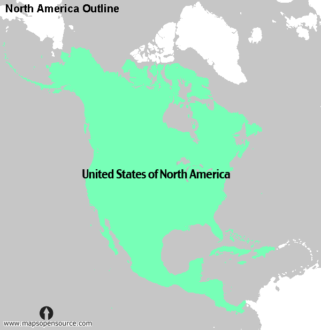 Current territory of the United States of North America (USNA).

During and after WWIII, the old countries of North America merged into the USNA.
If the initial merger was peaceful or bellicose is still debated by historians as most files and documents have been lost during and shortly after the war.

The USNA comprehends the territory from the state of Alaska to the state of Panama. The border with the Union of South America is the Panama Canal, which has a special status given by both countries.

The actual capital of the USNA is Houston.

During WWIII, Washington DC was decimated and the administrative center has been relocated to Houston and since then has been the capital of the old USA and the actual USNA.

1) Map based on North America from: mapsopensource.com (MOS)

B10 ~ The Compatibility Test

News from the Author

Due to the mentioned circumstances in this post, I’ll be pushing back chapter B06 ~ Venus Beach until I have really finished it. Meanwhile, I’ll publish revisions, as suggested by my patrons.

END_OF_DOCUMENT_TOKEN_TO_BE_REPLACED

I am sorry to tell you that I have to delay today’s publishing of B03 ~ The Parents of the Bride for patrons due to feeling ill. It’s not too bad, just a bit... END_OF_DOCUMENT_TOKEN_TO_BE_REPLACED

The Queen and the Phoenix spotted in the Lost Millennium.

SpeedKitty and the Phoenix spotted on a date!

Status: Out for Patrons!

A unique look into Kira's background for patrons.Find more about Kira's teenage years and his rise to become the Phoenix in this extra. END_OF_DOCUMENT_TOKEN_TO_BE_REPLACED

A unique look into Kira's background for patrons.Find more about Kira's parents, his great parents, and his early years in this extra. END_OF_DOCUMENT_TOKEN_TO_BE_REPLACED

Vehicle and Pilots Administration A dependency of the Ministry of Transports. Administrative agency responsible for evaluating and issuing piloting licenses and cargo transport licenses. END_OF_DOCUMENT_TOKEN_TO_BE_REPLACED